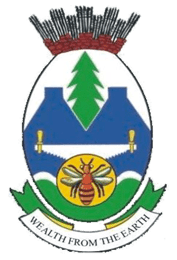 The KouKamma Local Municipality is situated in the Eastern Cape Province of South Africa and forms part of the Sarah Baartman District Municipality.

The geographical area of the Municipality is 3,575 square kilometres and includes a combination of rugged coastline, narrow coastal plain and a series mountain ranges and valleys. The name is derived from the Kouga (Kou-) and Tsitsikamma (-Kamma) mountains.

The municipality’s western border is the Bloukrans River which separates the KouKamma Municipality from the Western Cape Province. The municipality is known for its dramatic scenery, low population density and scattered towns and villages. The coastal belt of the KouKamma Municipality is known as Tsitsikamma and is home to dairy farm, forestry and a wealth of tourist activities. The world famous Storms River Mouth which is part of the Garden Route National Park. Inland is the beautiful Langkloof Valley. The valley is separated from the coastal belt by the Tsitsikamma Mountains and to the north are the Kouga Mountains. The valley is a highly productive deciduous farming area.

The KouKamma Municipality has no cities or even large towns but a host of villages and hamlets. These settlements are divided into 6 electoral wards and are governed by a 12 – member council.